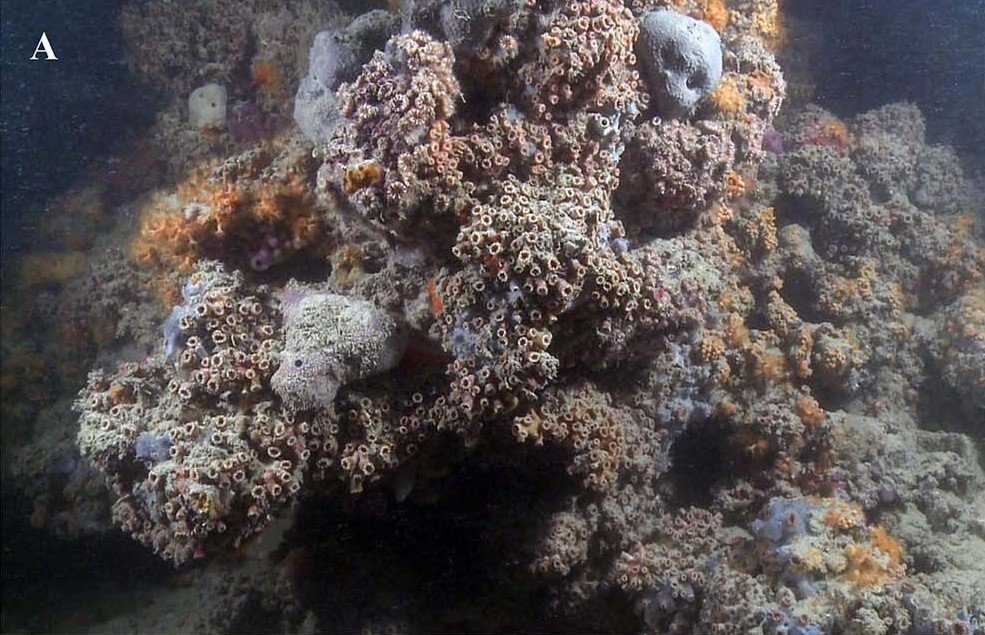 By Worldrise Staff20 Ottobre 2022No Comments

The deep sea of Apulian waters hides an important marine ecosystem: a mesophotic coral reef. Let’s find out what it is.

What are coral reefs?

Coral reefs are important bioconstructions of the sea and are among the most important and complex ecosystems dominated by vast biodiversity. Coral reefs consist of tiny organisms belonging to the Cnidaria family, called polyps, which secrete calcium carbonate and form large calcareous skeletons. In particular, the species of corals that build the reef are those belonging to the order of Scleractinia, also called “hard corals”. These structures house thousands of fish and other marine organisms that depend on the reef for food, shelter and reproduction.

Most corals that build the reef live in symbiosis with unicellular photosynthetic algae called zooxanthellae, which live within the coral’s tissue. This symbiotic relationship is mutualistic since corals provide the alga with shelter and essential resources for photosynthesis. The zooxanthellae, in turn, produce oxygen, glucose and amino acids, essential nutrients for fat production, carbohydrates, proteins and calcium carbonate necessary for reef construction.

Although coral reefs can be found in different seas and depths, most of them are found in tropical areas of the western Atlantic Ocean and in some regions of the Indo-Pacific Ocean, in shallow and oligotrophic waters, that is, waters low in nutrients. These environmental and climatic characteristics are necessary to allow and promote the symbiotic relationship between corals and zooxanthellae. 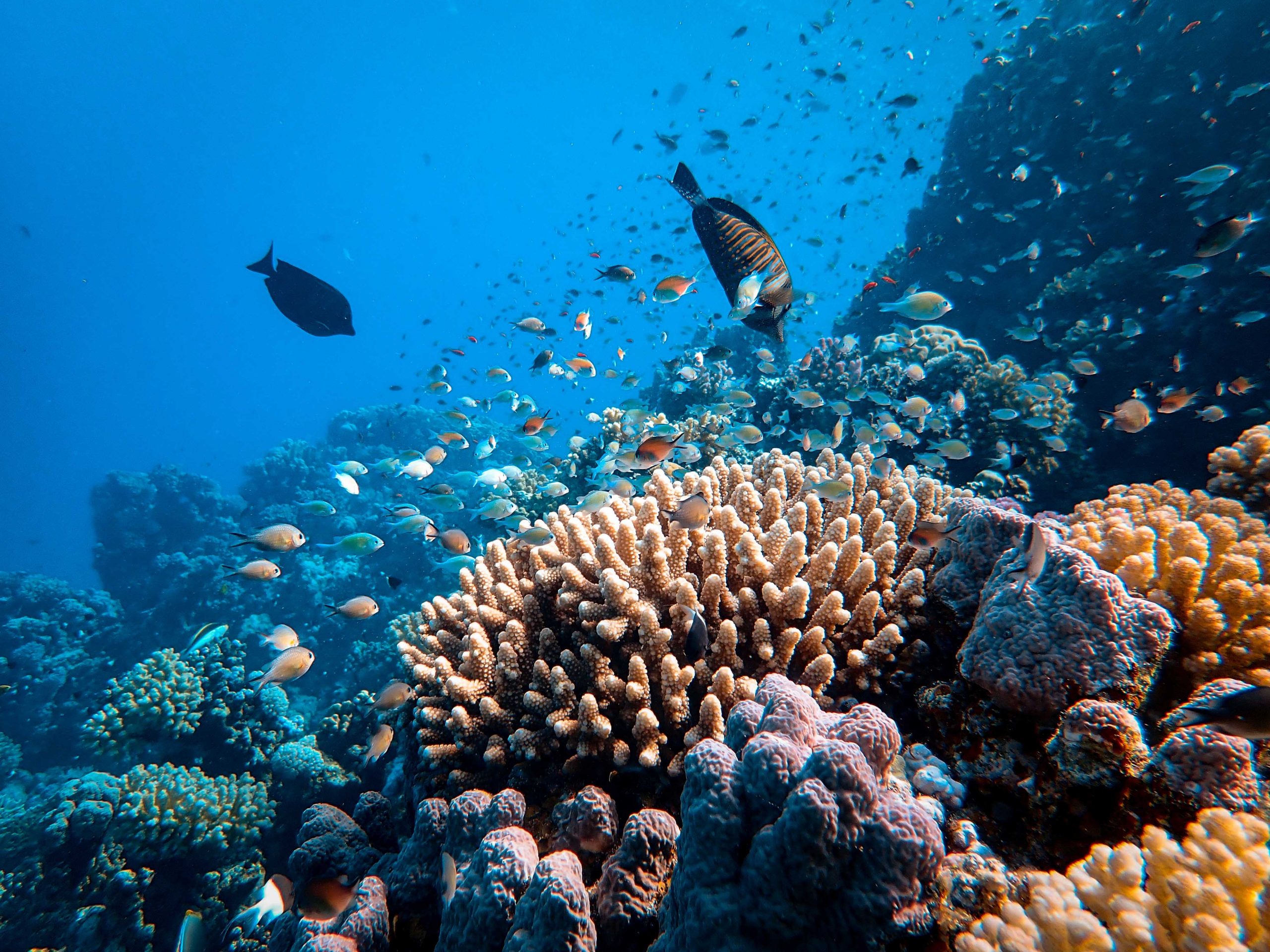 The coral reefs of the Mediterranean

In the past, in the Mediterranean Sea coral reefs were widely distributed and mainly dominated by red corals (Corallium rubrum). Currently, these ecosystems show a reduced distribution and extension. In shallow waters, they are constituted by the madrepore Cladocora caespitosa, the most important coral endemic to the Mediterranean that hosts the symbiotic microalgae, similarly to tropical corals. In deeper waters, however, there are structures of calcium carbonate built from cold-water corals, such as Desmophyllum pertusum and Madrepora oculata. They don’t host algal symbionts but use the organic material dispersed in the sea to produce the needed resources. 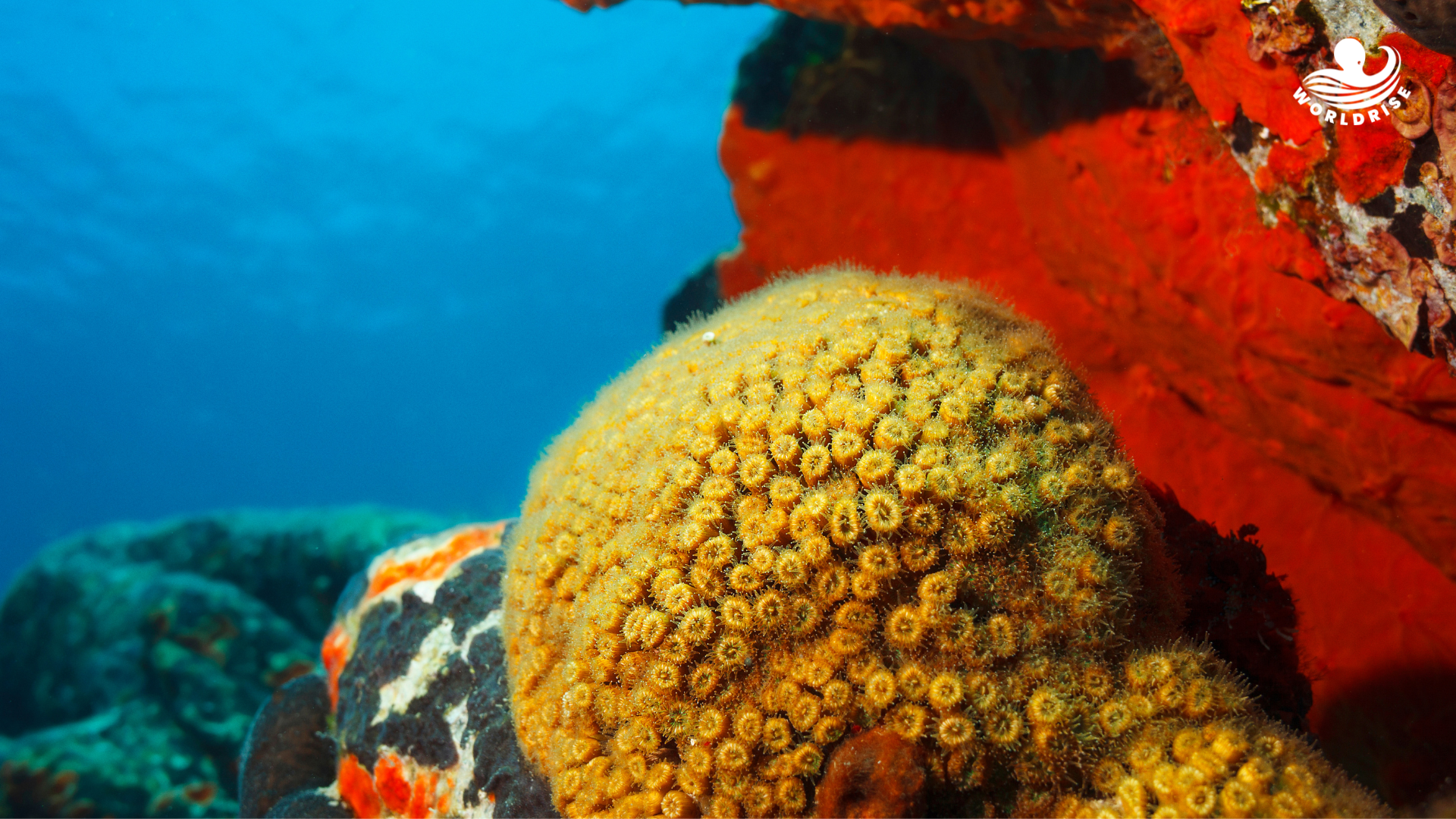 The study and unique features

In 2019, for the first time, researchers from the biology department of the University of Bari discovered a mesophotic coral reef in Apulian waters. The term “mesophotic” refers to that area of the sea between 30 and 200 meters deep, characterized by waters with low light penetration. Using submarine robots, researchers identified a coral reef between 40 and 55 meters deep in the Mediterranean Sea. The coral reef extends 2.5km from Monopoli to Otranto and consists mainly of Phyllangia americana mouchezii and Polycyathus muellerae, belonging to the order of Scleractinia. These two species of corals form a substrate for different sessile organisms and more than 200 invertebrates. 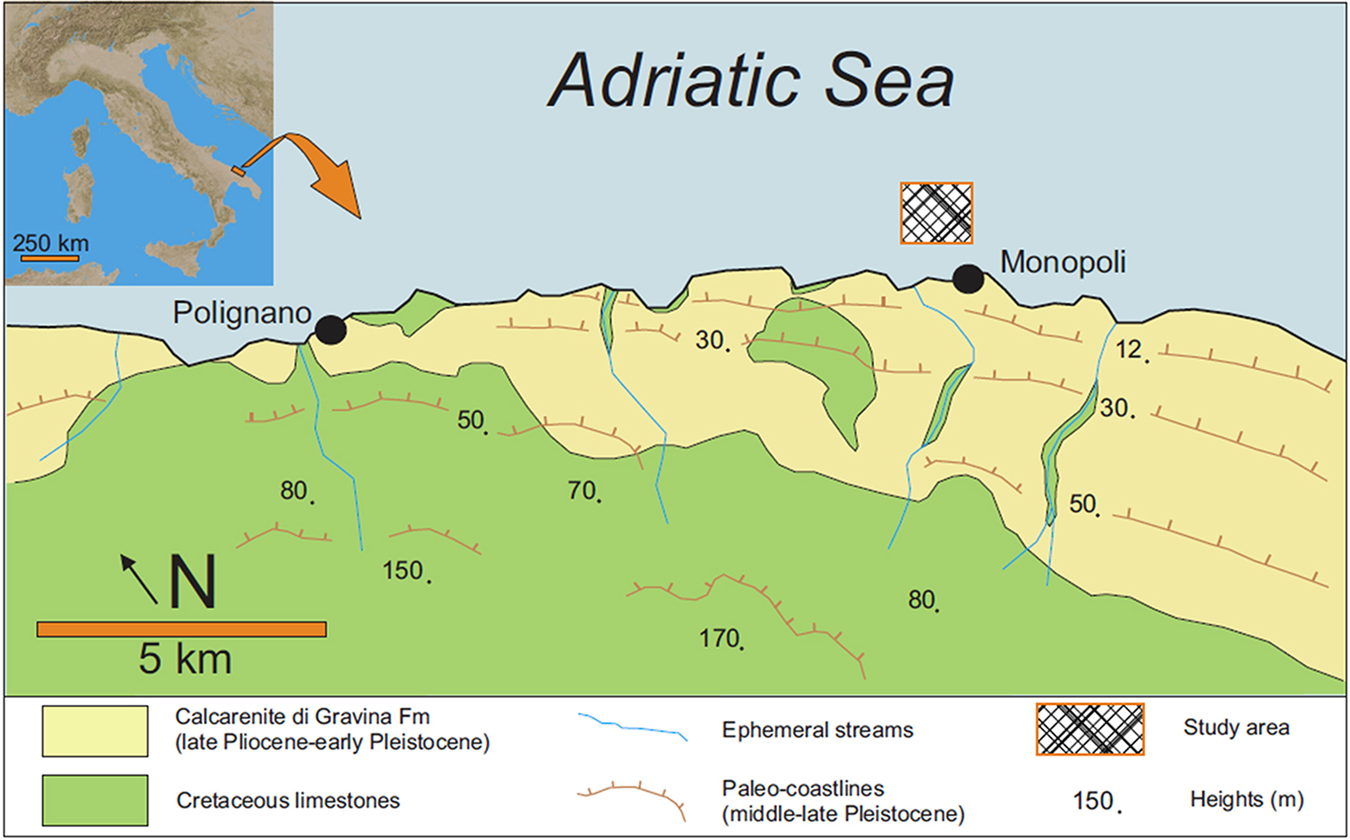 Although this coral reef shows very similar characteristics to its tropical counterparts, the habitat and colours are two peculiarities: at 50 meters deep, in the absence of light and symbiotic relationship between corals and zooxanthellae, the Apulian coral reef shows muted and saturated colours turning from orange to purple. In fact, most of the corals observed in the research area do not have symbiotic microalgae. The discovery suggests that the significant presence of organic material in this area could be the first source of food for corals. In addition, the observed corals were inhabited by several segmented marine worms, called sedentary polychaetes, and the mollusc Neopycnodonte cochlear, which contribute to the rigidity and compactness of the coral reef.

Scientists speculate that the reef may extend beyond the research area, albeit potentially fragmented. Recent research and photographs suggest similar coral reefs 100 km south of the study area. In addition, other bioconstructions consisting of P. americana mouchezii, P. muellerae and N. cochlear have recently been found 50 km north of the study area. To protect this hidden treasure, researchers alerted the Ufficio Parchi and Tutela della Biodiversità of Apulia, responsible for the Natura 2000 network, so that measures can be implemented to protect this exceptional resource in Apulian waters. The discovery of this coral reef in the Mediterranean Sea could represent a new way to promote sustainable tourism at low impact in the area and encourage the protection of the sea. 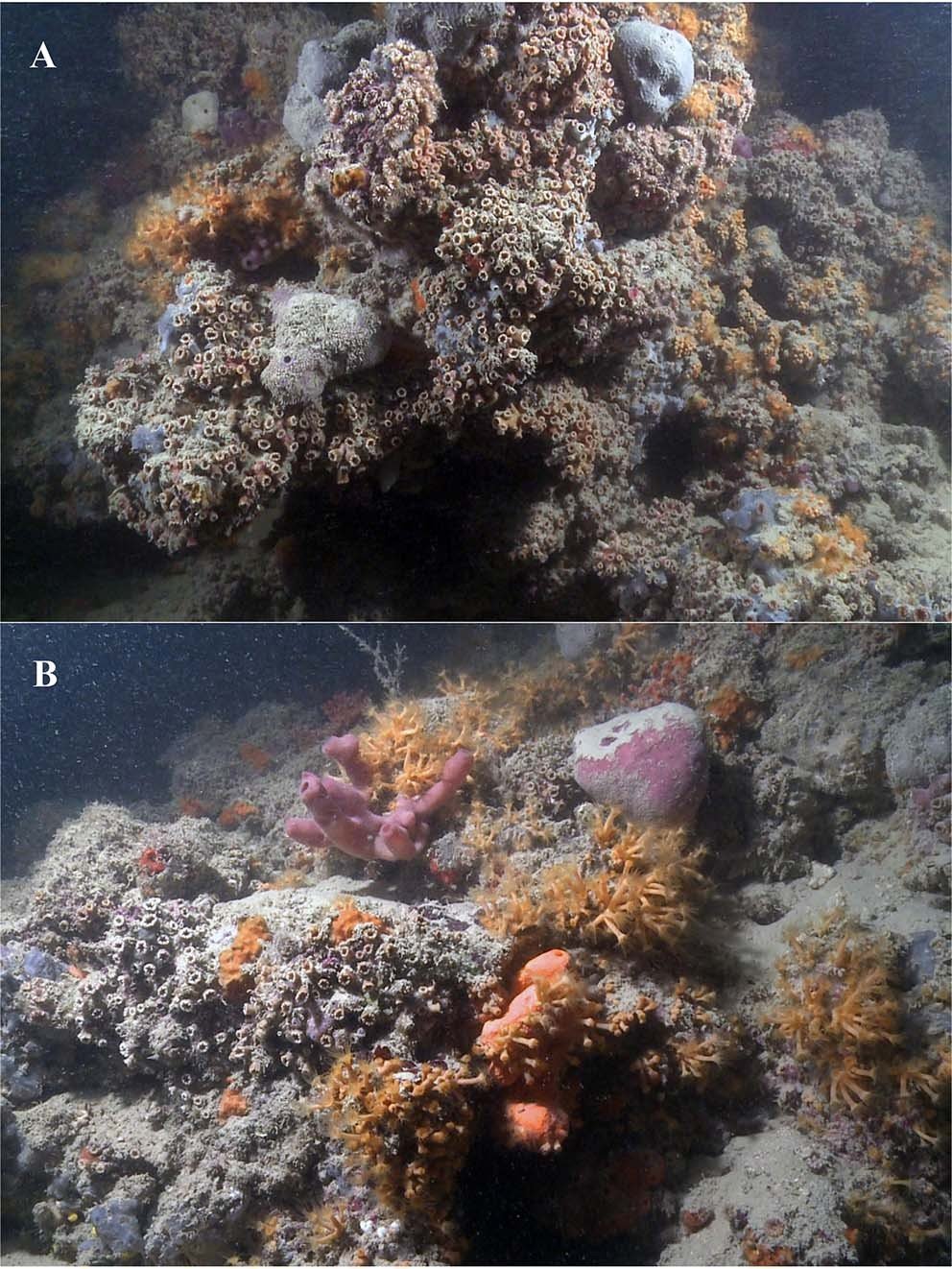 Martina is a marine biologist, recently graduated in International Marine Science. If she were a marine animal, she would be a dolphin, for its sense of freedom and cheerfulness.